Savings Program for Palm Beach Smiles Patients
No insurance? No problem! With our private dental savings plan, you can save money on your dental care without denials, claim forms, waiting periods, or annual limits. Click on the logo for more details!

Dr. Michael Barr selected as one of only 4 instructors for 6 Month Smiles (cosmetic orthodontics) in the U.S.
Dr. Barr has taught 6 Month Smiles to dentists all over the country, including courses in Miami, Washington DC, Chicago, and Tampa.

We’re In the News!
Dr. Barr was featured on CBS affiliate WPEC Channel 12 News (and WFLX Fox 29). Click on the play button in the window on the right to watch this interesting story!

Web Changes
Check out recently added “before & after” photos!

We just added a page where you can download our registration forms. Now you can conveniently “do the paperwork” at home.

Dr. Barr co-chaired a 7-month course on Cosmetic Dentistry for both 2013 and 2014 at the Atlantic Coast Dental Research Clinic.

On April 26, 2012, Dr. Barr spoke at the annual Dentaltown meeting in Las Vegas.

Dr. Barr finished teaching a 7-month course at the Atlantic Coast Dental Research Clinic in May 2010.

Dr. Barr attended and lectured at the Academy of Comprehensive Esthetics Conference on “No Prep / Minimal Prep Porcelain Veneers” in Cleveland, Ohio in June 2009.

Dr. Barr lectured at the Academy of Comprehensive Esthetics meeting in Austin, Texas in March 2008.

Dr. Barr spoke at the Florida Academy of Cosmetic Dentistry in September 2007.

Dr. Barr was the featured speaker at the April 2007 meeting of the Central Palm Beach County Dental Association.

Dr. Barr was a featured instructor for the Cosmetic Dentistry course at the Atlantic Coast Dental Research Clinic 2006 – 2007.

Dr. Barr attended and was a featured speaker at a national meeting in Las Vegas in March 2006. 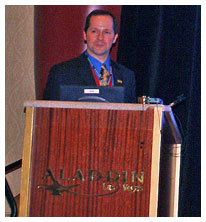 Dr. Barr and the Palm Beach Smiles team attended a four-day dental meeting in Miami in April 2003. This was a meeting of some of the most advanced dental teams in the country with a focus on the latest in dental care. This meeting was even more of a milestone because it was Dr. Barr’s debut as a featured speaker on a national level. Dr. Barr spoke for two hours on dental office design to a packed room of about 90 people. The feedback was very positive, and it looks like Dr. Barr will be embarking on a speaking career in addition to his practice.

Dr. Barr attended a dental meeting in Las Vegas in April 2003. He attended a number of seminars over the course of 4 days.

Dr. Barr and staff attended a 4-day dental meeting in Orlando in April 2002. They attended a combined 60 hours of continuing education. A variety of courses were offered focusing on patient care, five-star service, and cosmetic dentistry. Dr. Barr and staff are looking forward to implementing many new ideas in the new office!

Dr. Barr completed teaching another course with the Aesthetic Advantage in March 2002. This course attracted dentists from all over the country, Canada, and even England. Many patients’ lives were changed through today’s advanced cosmetic techniques.

In July of 2001, Dr. Barr published an article called “Changing Lives” in a national dental journal. The article described a recent case performed by Dr. Barr and how it not only changed the patient’s appearance, but how it may affect the patient’s life. This patient suffered from a smile devastated by severe decay. The final result was nothing short of dramatic. Dr. Barr received dozens of phone calls, letters, and e-mails from dentists around the country complimenting the article.

In September 2000, Dr. Barr was selected to be a clinical instructor with The Aesthetic Advantage. This is the course Dr. Barr attended last year (see below) for advanced training in aesthetic/cosmetic dentistry. This appointment is a great honor for Dr. Barr. He will be involved in the training of dentists from all over North America. The next course will be in January of 2001.

In July 2000, Dr. Barr published an article entitled, “The State of Continuing Education” in the quarterly newsletter of The Atlantic Coast Dental Research Clinic.

In June 2000, Dr. Barr and the staff attended the annual Florida Dental Association meeting in Orlando. During the three-day event, they toured the exhibits and attended a few seminars. The exhibits were especially interesting this year, as dental technology has evolved at an incredible rate. Dr. Barr commented, “this is like fantasy land!” One of the courses attended was an update on dental restorative materials. The science of dental materials is advancing at warp speed. Keeping up with this area of dentistry is essential in a practice like Palm Beach Smiles.

Dr. Barr attended a course, “Restoring the Worn Dentition” in April 2000. This course was given by one of the foremost authorities in jaw joint problems and reconstruction of severely worn teeth, Dr. Terry Tanaka.

Dr. Barr wrote an article about internet websites in dentistry that was published in the January 2000 issue of Today’s FDA (Florida Dental Association). It was the sidebar article to the cover story about technology.

On November 14, 1999, Dr. Barr and Sandy completed the Advanced Aesthetics Course. (Dr. Barr completed the Level I Aesthetics Course in March of 1999.) This course was an intensive study and “hands-on” experience which included treating one of Dr. Barr’s patients. This training places Dr. Barr among the most highly trained aesthetic dentists in the country. Of course, Dr. Barr is dedicated to continuing his education as dentistry evolves at an ever-increasing rate.

Dr. Barr wrote an article describing a clinical technique which was published in the August 1999 issue of The Journal Of The American Dental Association (JADA).

New Technology! The Laser Cavity Scanner!
The way dentists have always looked for decay has been to run a very small metal instrument, known as the “explorer,” over the tooth to feel for a hole or “stick.” Billions of teeth have been saved by the diligent use of the explorer and X-rays to detect decay.

However, despite their best efforts, dentists sometimes can’t find the tiny surface hole that is just big enough for bacteria to enter through the enamel to create decay on the inside. The tooth decays internally without any evidence on the surface for the dentist to detect. Fluoride, which strengthens enamel against decay, oddly enough, has compounded the problem. Before fluoride, the bacterial action left some evidence of enamel breakdown on the surface of the tooth, which was helpful in diagnosing decay early. Now, because the enamel is strengthened, this early warning is missing, and the bacteria sneak inside through a hole that is too small for an explorer to detect. X-rays may also fail to reveal this decay until it gets fairly large.

Dentistry is just now able to look at a generation of people who grew up with fluoride, and we are now able to understand this unexpected phenomenon. Fortunately, science has come to the rescue.

By using a LASER SCANNER, we are now able to detect early decay through the grooves and cracks of teeth with 90 – 95% accuracy. The LASER SCANNER displays a numerical readout and an audible signal when it encounters decay in the tooth.

It is important to detect decay as early as possible. The smaller the cavity, the smaller the repair. With the advent of new materials that recreate tooth structure and “microdentistry,” we are able to preserve more of your natural tooth.

Although the LASER SCANNER will not replace traditional methods of diagnosis completely, it will help tremendously in avoiding the repair of big cavities and some root canals by catching them early.

Dr. Barr believes this incredible new technology will become standard in dental offices in the future.

Ask about it at your next visit!

Dentistry in the News

Researchers have discovered possible links between periodontal (gum) disease and heart disease. Floss daily! Even more recently, a link between periodontal disease to certain types of cancer has been suggested. Further studies are needed, of course.

Studies indicate that smoking and smokeless tobacco users have a much higher occurrence of decay. Dr. Barr has observed this to be true in his practice and encourages his patients to avoid tobacco use of any kind.

Another recent report indicates that the population most prone to decay is our senior citizens rather than children. Years ago, children were the most susceptible. However, today, children have the advantage of fluoride and sealants. On the other hand, seniors are keeping their teeth longer, and in many cases, for life. Gum recession leads to exposed root surfaces, which are more prone to decay since they lack the protection of enamel. Furthermore, many medications can cause dry mouth, which can increase decay. For this reason, we are recommending that our adult patients who may be prone to decay get fluoride treatments at their recall visits.